All3DP review the new iSUN3d LTP4.0 3D pen, an extremely safe and easy to use 3D pen with a low-temperature pen tip.

Whether you’re looking for cheap 3D printing filaments or affordable printers, the company eSun has a wide reaching arsenal of products to help jumpstart you’re 3D printing journey. Beyond the wide range of materials, the Chinese manufacturer also has its own line of 3D pens.

For those that don’t know, a 3D printing pen allows you to draw 3D objects by hand using melted filament. Now, the 3D printing manufacturer is releasing the iSUN3d LTP4.0, a new version of their 3D pen line that offers low temperature and safe 3D printing by hand. eSun decided to let All3DP test drive their new 3D pen, and we were quite impressed with the features packed into this affordable, child-friendly device. After experimenting with the iSUN3d LTP4.0, we found this 3D pen to be the perfect toy or introduction to drawing in three dimensions. Read on to see what we created and thought about this new 3D pen! 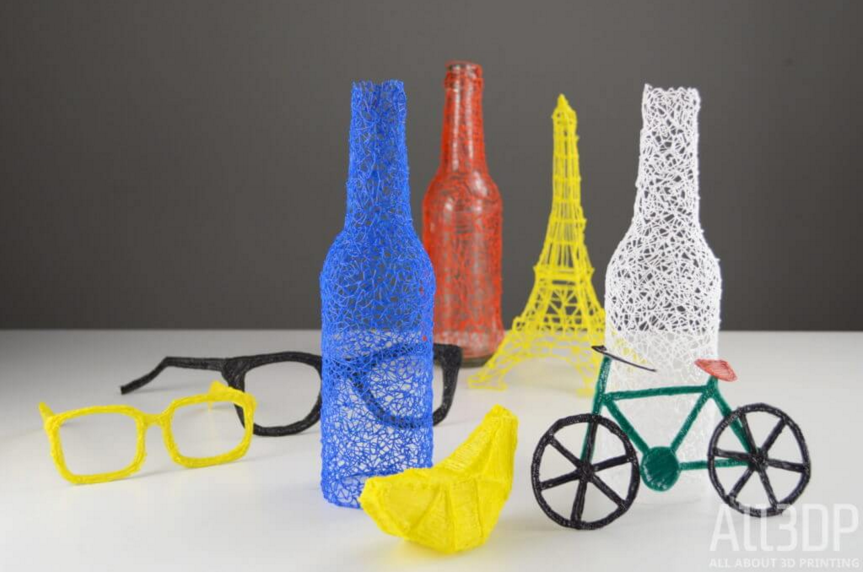 The iSUN3d LTP4.0 is a very simple and easy to use 3D pen, especially for someone with little experience. From unpacking to printing, the whole process takes very little time to get your creative juices flowing. What makes this 3D pen especially unique is the low-temperature pen tip, which allows children to use this device without encountering any risk.

The special eMate-PCL filament is engineered to extrude at an extremely low temperature. Although this pen is very safe and easy to use, there are a few drawbacks. For example, the 3D pen must be plugged in at all times in order to work. Additionally, the filament sometimes became stringy when trying to stop the drawing process, leading to a few unclean finishes.

All in all, if you couple this 3D pen with the various stencils available throughout the internet, you can freely exert your creativity into any 3D project you want. While other high-end 3D pens may offer higher quality and more features, the iSUN3d LTP4.0 is ideal for beginners and young artists. Moreover, the pen is priced at just $20, making it a worthwhile investment for any maker or parent on a budget. When we first opened the package, we were quite surprised to see how compact this pen actually, almost resembling a pen you could write with. It’s a very lightweight and simple product (equipped with just one button), but we didn’t let the pen’s simple nature fool us.

The first step was to find a USB port to connect the pen for power. This is a new  design style for the iSUN3d 3D pen family. This makes the pen really convenient and easy to use while the user is on the go. You can print anywhere you like as long as you have a power source that has a USB port with you. The pen can also be connected to a socket, which we also gave a try; however it’s obviously not necessary and restricts your movement a bit more. The next step was to insert the eSun eMate-PCL filament into the pen. This is a special kind of filament that works specifically with this pen because of the low-temperature tip. The filaments are securely packaged, provide good quality prints, and most importantly, are made of environmentally friendly bio-polyester that come in different colors like yellow, red, blue, green, white, and black. Each spool also comes lengthy enough that you can work on your project long enough without having to change to another batch. The pen has only one small entrance for the filament, so the set up is done in a matter of seconds.

Afterwards, it was time to get the pen to start printing by pressing the only button the pen had, making the process super uncomplicated and then waiting for it to heat up. When the temperature is set and the pen is ready to get printing, the small indicator light on the 3D pen turns from red to green. Simply press the button again and the melted filament starts flowing from the pen.

The first try was just a little bit tricky, as the filament wasn’t really pushed in until the very end and there was no extrusion from the nozzle, only a hollow sound. However, after pushing in the filament one more time, it was working perfectly.

It is really amazing to see how this 3D pen was operating at such a low temperature. Even if you choose to use the 3D pen on your own skin (which we actually tried), you would barely feel a thing. The working temperature in the pen is between 75° and 95°C, but the temperature of the tip only gets up to around 25°C, so it doesn’t get hot enough to be considered harmful. Therefore, this makes the pen perfect for young children to use. It also shuts off and cools down while idle.

The melting of the filament and the application was actually pretty smooth. The extrusion was even and it also cooled very fast. What was very nice was that after the filament cooled, the material was quite durable. One small problem was the stringy finish when the printing process was stopped. If you stop the pen and start printing again, over and over again, you will have a very stringy end product. So, we ultimately recommend that users “print” in one go without lifting the pen as much as possible.

Since the pen must be plugged in at all time, we also recommend using a long USB cord. Otherwise, the usage can be limited and you may start experiencing wrist-aches if you keep at it for a long time. Other than that, the iSUN3d LTP4.0 was quite easy to draw with, while getting it to start/stop was as easy as clicking one button.

As with 3D printing, this pen produces some relatively loud sound during the process. While we didn’t consider this to be a big problem, we figured it would be worth mentioning. All in all, it is a fun and safe pen that can turn your ideas from a thought into 3D reality. While drawing freehand is fun and easy to do with this pen, we found the best results came when we used stencils.

The first attempt was with an Eiffel Tower stencil. We used a plastic 3D stencil with a little bit of depth, allowing us to draw inside of it. The only thing that can get annoying is the stringiness, making it necessary to sometimes go over sections. At first, binding the parts together using the 3D pen again wasn’t as easy as it looked; it was messy and thick in some parts and just didn’t look clean or straight as a finished product. The pieces were too delicate and had to be handled way too carefully. It looked more like the leaning tower of Pisa when it was finished, which wasn’t what we were expecting.

This is why we decided to use a flat 2D surface as a stencil on the next go-around. I wanted to try and make a 3D geometric fruit, drawing inspiration from the pear that we did before while using another 3D pen. That review can be found here if interested:….. Since we had bright yellow filament sent from eSun, we decided to go for a banana.

This stencil we found online was a basic 2D stencil that we printed with a conventional 2D printer. It had to be filled in and later bent into a 3D shape. It was easy enough, and, since the 3D pen was printing at a very low temperature, the paper wasn’t getting deformed. The 3D printed filament could be easily and neatly lifted from the paper once it cooled completely. Only the ink was also coming off along into the printed product, but this was easily fixed by going over those parts again and hiding them. Again, the final assembly was a bit challenging, because the filament was kind of tough to bend in the designated areas. But, in the end and the finished product was more presentable and polished than the Eiffel Tower project. The problem of having uneven and stringy extrusion in different parts still persisted, however I think this one worked out quite well.

Another thing we wanted to try were 3D glasses, which are popular designs that many 3D printing pen companies offer and promote. Using a 2D stencil again, we had to go over the separate parts on paper and later lift them off and then bind the frames and the edges later. You can check out the finished product (along with our bicycle) in the photo above. The 3D projects we tried turned out pretty nicely in the end. As we continued on with more objects and got the hang of using this pen, the final products turned out more polished and clean each time.

All in all, the iSUN3d LTP4.0 3D lived up to our expectations, especially for such an affordable and safe device. It was very easy to set up, to use, all while offering safety and an ergonomic design. At the end of the day, what more could you want from a 3D pen? I’m sure the design could be further improved in the future, but so far this is a very adequate 3D printing pen and definitely recommended, especially if you’re new to 3D printing or want a safe gift for your kid.

Next： AMCC 2017: The future development of 3D printing standard system