In 2014, the first ZYYX 3D printer appeared out of Sweden, catching our attention with its unique, enclosed design featuring built-in air filtration. This was followed up with enhancements in 2015, the ZYYX+ 3D printer in 2016, and the industrial-grade ZYYX Pro 3D printer in 2017; as the desktop 3D printers continued to develop with improved performance and features, they also began to make their way around the world. Distributors in the US and the UK signed on to bring ZYYX machines to their customers, and just this month, the Swedish 3D printers also became set for wider availability as ZYYX signed an agreement with Shenzhen Esun Industrial Co., Ltd. (ESUN) for distribution in China. 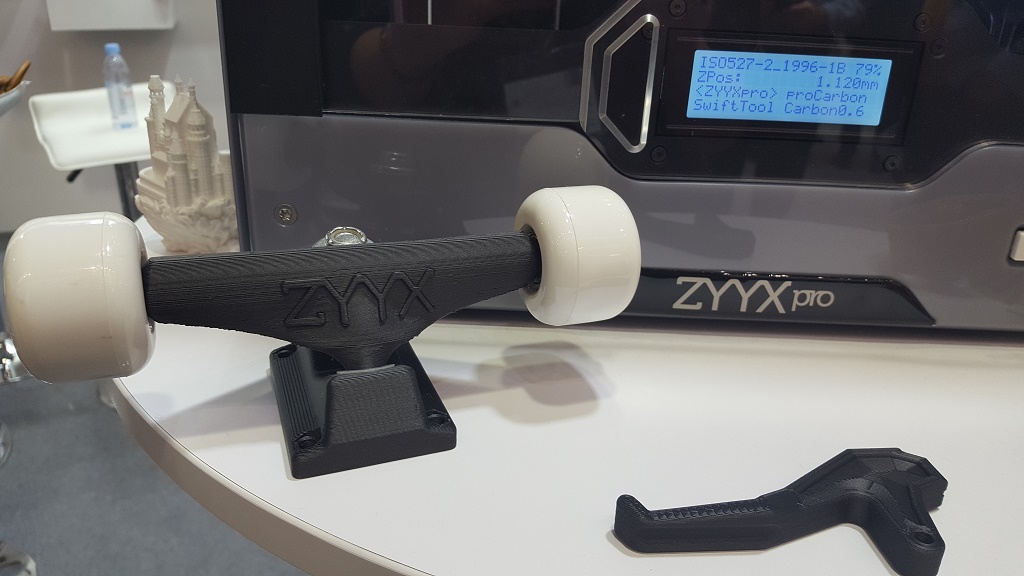 ZYYX has long had ties to China, as Magicfirm Europe AB, which owns the brand, has China-basedMagicfirm LLC as a shareholder; Magicfirm Europe itself is registered in Sweden. The partnership with ESUN represents a natural extension of an ongoing relationship between the two companies, as they had been working together on materials development for use with the ZYYX Pro. The announcement of their new relationship was formalized during formnext, where I had the opportunity to sit down with the CEOs of both companies to learn more about their work together and hopes for the future. Mats Moosberg, CEO of Magicfirm Europe, and Kevin Yang, ESUN’s CEO, were kind enough to share with me their views on strength in desktop 3D printing. 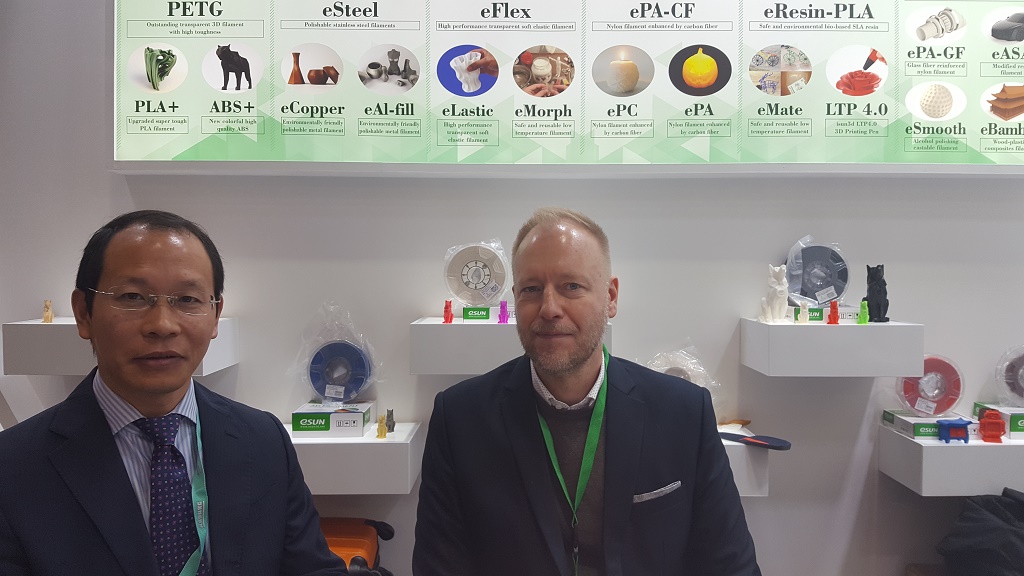 “We have worked with ESUN for some time,” Moosberg began, nothing that as ESUN has worked with the ZYYX Pro 3D printer and its capacity for engineering-grade matreials, there has been a “clear focus on professional use.”

He continued, “It’s quite obvious being at this show that this is the right focus — we have provided quite a large number of quotes here, and even sold this floor machine to a customer who will take it home from here.”

Machine sales were common throughout this year’s formnext, as the industrial-focused event saw a large number of serious-minded buyers looking for the best-performing 3D printers to meet their needs. Many 3D printers were sold throughout the show, as each day saw more machines with ‘sold’ signs appearing on them to indicate spoken-for units. The floor model that ZYYX was displaying went home with its new owner from Frankfurt, avoiding any delays in shipping. 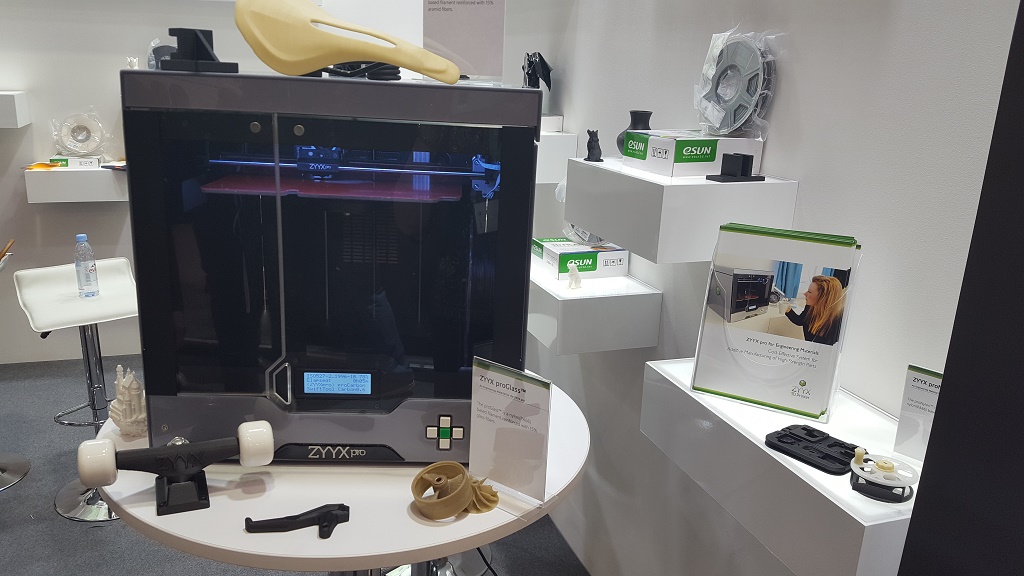 “ZYYX have very good experience with engineering,” Yang said, taking up the narrative. “They have been using engineering polymers; carbon fiber is very important, and does very well on this machine.”

Helpful to this performance with industrial materials, Moosberg underscored, are certain qualities of the ZYYX Pro, such as an easily replaceable hot end that allows for “more applications, more materials.” Working with ESUN, he said, will add additional capabilities as they work together on 3D printing higher-temperature functional materials.

“We look at medical, at industry, and we are developing materials for functional use. We work together for the right materials and parts to make it work,” Yang told me.

Focusing on the medical vertical, the two used the example of a hospital in Gothenburg that they have been working with. There, they have been talking with a surgeon who works with craniomaxillofacial patients and is looking to bring desktop 3D printing capabilities into the hospital for patient-specific medical models and tools. Dental applications are also in view.

“Together, we can promote applications more deeply,” Yang continued.

“With R&D working together, we can serve customers better, with our marketing and sales together. ESUN is already global, with about 40 distributors in around 100 countries, and we are helping to promote ZYYX, to build this globally. Working with the ESUN sales channel, we cooperate; this is a channel for big markets.”

Moosberg noted that expansion efforts into China are also helped through the work with ESUN.

“There are a lot of 3D printers in China, but not many machines like this, a desktop professional unit,” he said.

Looking to these professional capabilities, the pair touched on the automotive market, an arena increasingly adopting 3D printing in operations. High-strength, engineering-grade materials have a great deal to offer in automotive manufacture. With materials and machine suppliers working together and communicating directly with customers, Yang and Moosberg noted the improved and targeted solutions becoming more available to users.

“China is a superpower in automotive, too, which is very important for product development,” Moosberg added.

“Here, for the first time we are showing glass fiber filled nylon; this is not launched yet, but it is important to show. This is cheaper than carbon fiber nylon, and for many it is a great fit… We are also working with kevlar material, which has launched but is not shipping yet. We have an ambition to be open, to cooperate.” 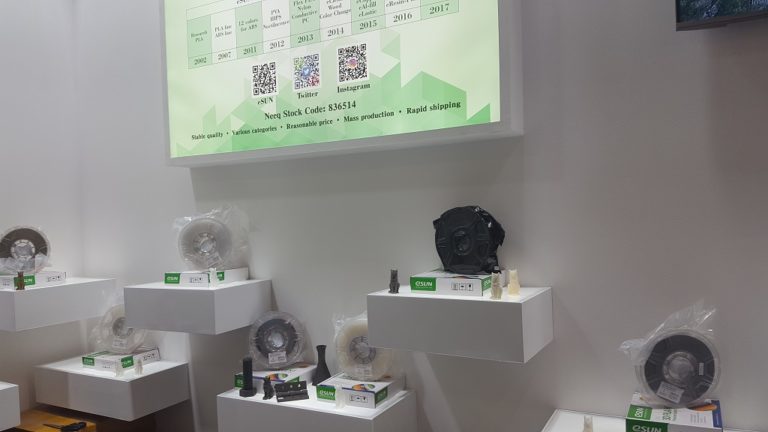 That spirit of cooperation underscored a great deal of the convesation, as Moosberg and Yang both highlighted the benefits to not only their companies’ partnership and work together with customers, but with wider focus on collaborative efforts.

“We cooperate with many companies and media, for the future it is important to work together to serve customers to the industry. We are working with Magigoo, with a company making PEEK, a company making 3D printers for education; these are all very special, very capable companies working together,” Yang told me.

“We are open for innovation, concerning customers, supply, and competitors globally. We have been visiting, attending seminars and conferences, seeing customers, understanding research. We have had more than 100 days in a year visiting customers, we see who makes sense, compare who we are working with, and how. We look at different directions for different markets, for consumer and industrial; we are developing ideas, these must be machines for customers to use easily. In the consumable market, we must be very smart, materials must cooperate and be friendly to operate. Material and machine help each other… We want to push, to support the whole market.”

From the cooperation between ZYYX and ESUN to their leadership’s views on wider-ranging collaboration and communication, Moosberg and Yang highlighted several of the biggest issues in 3D printing today as the industry continues to mature and become more focused on industrial quality. 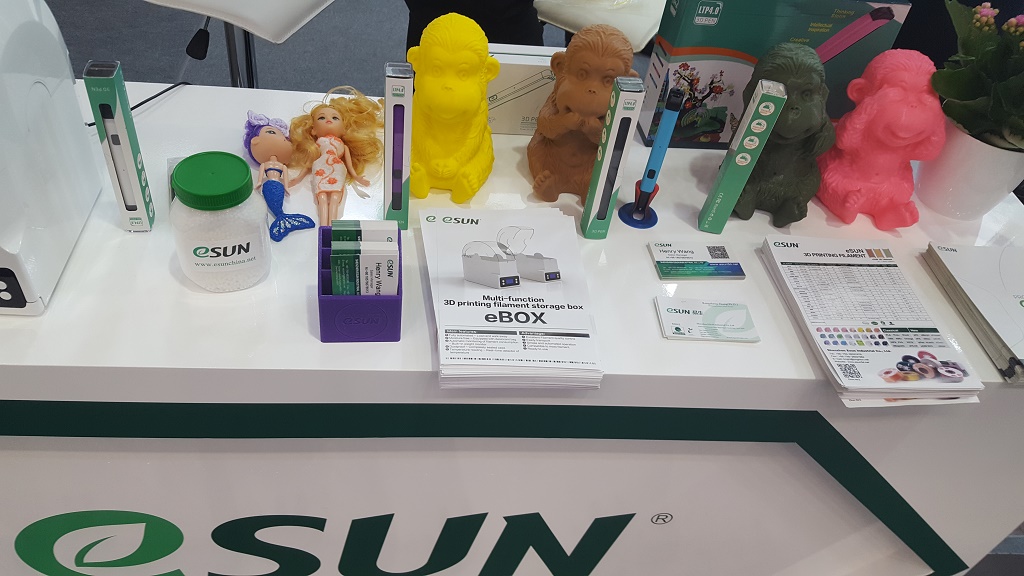 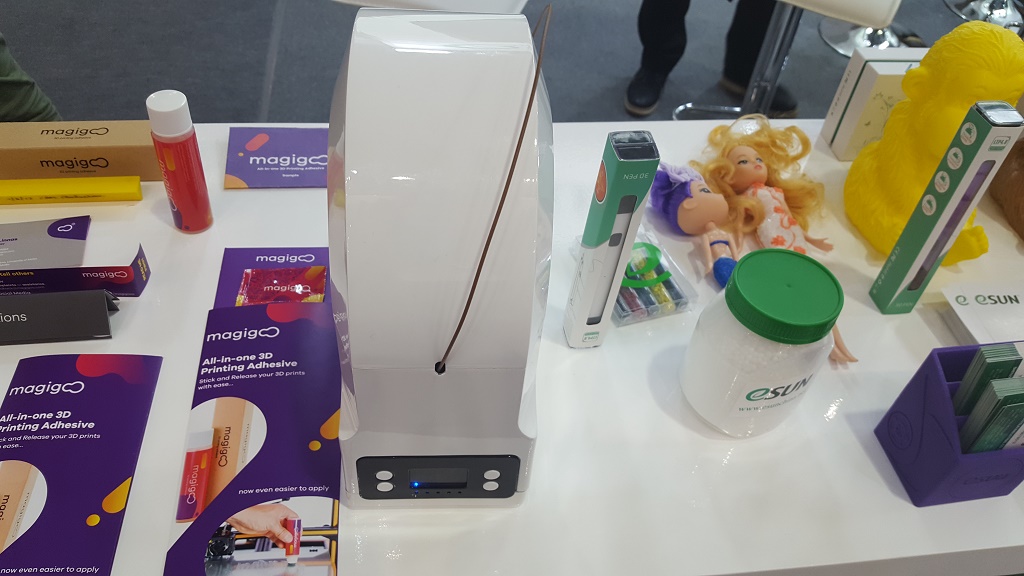 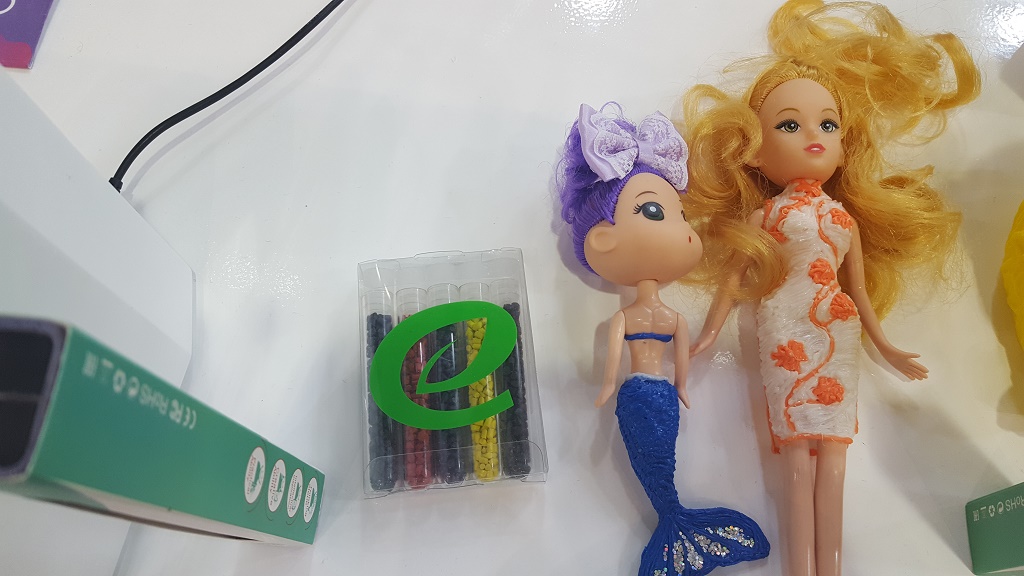 Of course it’s a wide market, with a variety of applications, and with ESUN offering around 30 types of materials for 3D printing, not all are carbon fiber or PEI focused for industrial use; the company has also been working on a low-temperature 3D printing pen, which Yang was kind enough to present to me. The lower temperature of operation makes the pen safe enough for younger operators to use without fear of burns, and some displayed designs showcased dolls wearing some fancy fashions drawn with the 3D printing pen.

ESUN attended more than 30 shows this year, and alongside customer visits and other events, has been making every effort to stay informed about and in touch with the industry. ZYYX has also been making big efforts to enhance international presence; formnext was the second time I saw Moosberg in recent weeks, as during September’s TCT Show he and the ZYYX Pro appeared with UK distributor Hawk 3D Proto, further showcasing partnerships around the world.